J.A.Chapman
James Ascott Chapman – Industry Works, Woodside Lane, Sheffield 1863-1939 – Toolmaker and Metal Plane Maker.
The following list is a small number of Ironmongers that Chapman made braces for and subsequently stamped the name of the Ironmonger on the brace. (This list does not include wooden/plated braces that the list below of toolmakers, have made.) For example Marples is listed as manufacturing Wood Braces/ Ultimatum, wagon wheel braces, Scotch iron braces…. Not steel American pattern braces. From Tyzac& Son “Throughout its history, the Tyzack firm resold toolsmade by others and also sold tools that they made themselves.”

The following is an approximation and ongoing research of braces manufactured in Europe as in some cases records of braces are often non-existent.

Braces made by Chapman 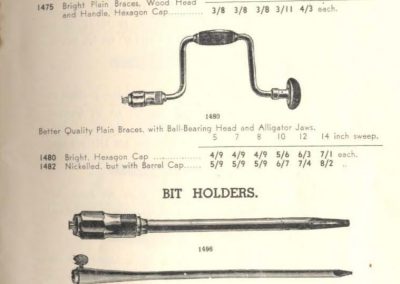 CHAPMAN, J.A.
No. 43
Type: Ratchet brace
Size: 10in
Notes: Has “BRITISH MADE “with “JAC” logo on the frame
Followed by 566 within a circle.
Chuck: Manufactured by J. A. Chapman Ltd.
Sheffield, England.

The Stanley Works’  Great Britain was formed in 1936 by re-naming the purchased firm of J. A. Chapman of Sheffield.

Chapman, J.A.
No 32. Rd
No 239718 with lever activated ratchet, (Photo 2) very similar to the simplified version of Goodells US patent No 488691 as used by Goodell-Pratt. Only one like this I’ve seen.

12″ Spofford style brace by Mathiesons of Glasgow, referred to in their catalogue as “Colonial Pattern” available 10 and 12 inch sweep.  In my opinion superior to those made by John Fray in USA because of the thickening of the casting at the thumbscrew of the jaw (photo 2) to give the thread a bit more length to avoid stripping, as often happens.

8″ Spofford style by Wynn & Timmins of Birmingham. The interesting thing about this brace is the thumbscrew is on the opposite side from those of Fray, Mathieson, and Boker. I have one other the same but it is unbranded.

CHAPMAN, J.A.
Type: Gas Fitters brace
Size:
Notes: Ministry of Defence“ lead sealed” tag tied to the brace.
Marked with J.A. CHAPMAN LTD and on another face the military arrow with number 35. The broard arrow or “crows foot” ordnance mark has been used on British Army equipment since at least 1553 and is a helpful way of determining if everyday items are civilian or military in origin. The 35 in this instance probably means that this brace was manufactured in 1935. Just out of interest six other countries used a similar marking, New Zealand used  N↑Z. and Australia used D↑D (Department of Defence).
So if this bace was indeed made in 1935 ( despite its’ primitive appearance) then it was manufactured a year before Stanley purchased the firm of J.A. Chapman in 1936 and renamed Stanley Works.

Mathieson
Size: 10 inch.
Notes: The number on the chuck is J.A.Chapman’s Registered number 239718 as well as MATHIESON.

SKINNER
No. 194
Type: Ratchet / morse taper socket brace
Size: 10in
Notes: From Skinner’s trade pamphlet “ No. 194 will take No. 1 morse taper drills or bit chucks in the universal socket, has a bright steel finish and natural coloured wood handles”
Made in Sheffield.

Skinner’s Morse taper adapter for the No. 194 brace.
The adapter would have been sold together with the brace.

SKINNER
No. 207
Type: Ratchet / alligator jaws
Size: 10in
Notes: They came with alternative round chucks.
Made in Sheffield.

SKINNER
Type: Wagon Builders style brace.
Size: 8 inch sweep
Notes: Ministry of Defence number 9616-263. As shown on the Gas Fitters Brace above, the last three digits are the same, 263 being the Standard Pattern Number probably to designate a brace.
The characteristic JAC monogram is present. It’s military marked with a broad arrow, and dated 1944.

UNKNOWN
No.?
Type: Ratchet with round ratchet selector.
Size: STEEL 10in
Notes:No markings apart from “STEEL 10in”
Chuck is tapering decagon. The only other brace that I have ever come across that has decagonal chuck sleeves is Fray and these are shown in Frays’ catalogue number 26.

It could be either Chapman (most likely) or Skinner……? 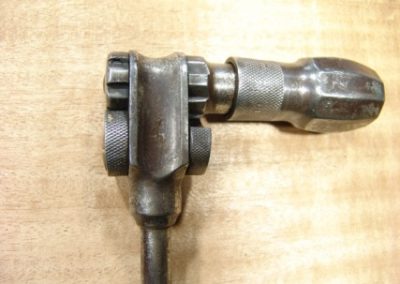 SCOTCH BRACE
The hexagonal cross-section and thickening of the grip are typical of Scotland.
A lever catch to take a notched tang bit. There is a number 5 either side of the opening at the end of the chuck.
Late 1800’s.

SCOTCH BRACE
Has “THOMSON” on one side of the …….. and “GLASGOW” on the opposite.
Possibly Thomson and Co., Crown Ironworks, Glasgow. 1874

GERMANY
10in sweep
Adjusted by turning the serrated collar.  The chuck accepts square tang and flat tang bits.
Some of these have “D.R.G.M.”
The acronym D.R.G.M. with or without punctuation stands for Deutsches Reichsgebrauchsmuster, meaning that the design or function of an item was officially registered inside all of the Germany states and not only locally registered as it was the case before the introduction of centralized registration. Note that many people quote this acronym as standing for Deutsches Reich. D.R.G.M. registration was introduced 1891.

GERMANY
10” sweep
Turret brace.Will accept square and round tangs.Provision for the collar to be tightened with a spanner.
Some of these have “D.R.G.M.” and also “D.R.P.a.”