Joseph H. Rusby was born in 1870 and died in 1946. He was the Son of John Rusby and Brother of the Reverend Samuel O. Rusby (My Grandfather) and the famous Henry Hurd Rusby MD, explorer, author, pharmacologist, Dean of the School of Pharmacy at Columbia Univ. and Co-founder of the New York Botanical Gardens and author of many papers and books including “Jungle Memories.”

His Father, John Rusby was part of the grass roots movement that founded a new political party with the single purpose of stopping slavery. Many meetings were probably held in the second floor meeting room above the John Rusby neighbourhood store in Nutley , N.J.

Joseph H. was my Great Uncle and I visited his workshop at 25 Holmes Street in Nutley , N.J. after he passed away in 1946. Joseph never married and to the best of my knowledge he did not like riding in automobiles and preferred his bicycle. In fact, his death was caused by being struck by a truck while riding his bicycle at the age of 76. His workshop was in Nutley but his patents were issued in Newark and that is probably where his lawyer applied for them.

Uncle Joe tried to promote a two sided violin case, a system for keeping clotheslines from tangling, a lawn mower that would mow 1 ½” from a wall, an improved safety extension ladder and a couple of gear driven drills which he referred to as braces. My Father and my Uncle Bob purchased some of his equipment from the estate and installed it in their homes. We had a small drill press, a metal turning lathe and a couple of electrical motors. My Father, Joseph Vincent Rusby worked on several inventions with the same equipment and developed a patent for the storage of weights raised by tide power to produce electricity. With guidance from my Dad, I learned to do some basic functions with the equipment.

I remember the shop and have included photos of Uncle Joe at work and also experimenting with the early stages of photography with his attempts to include his cats in his photos. Joe was an expert with the slingshot and played the violin. He was an economist and had some theories that he promoted.

He made a living making and selling his adjustable drill model which he developed about 1900 and included wood handles and a “breastplate” which was put away or lost by many craftsmen. I often used the drill and the extension feature was handy for putting screws in the beams in our basement workshop. I could rest the breast plate on my shoulder and adjust the length of the drill bit shaft and drill away.

Rusby described this tool as an “extension or extendible brace”. The chuck can extend 9½”.
The promotional leaflet was believed to have been included with each drill shipment.

Joe’s workshop, he lived in an apartment over his shop, this was in a small barn.

One of his inventions was a double sided violin box. 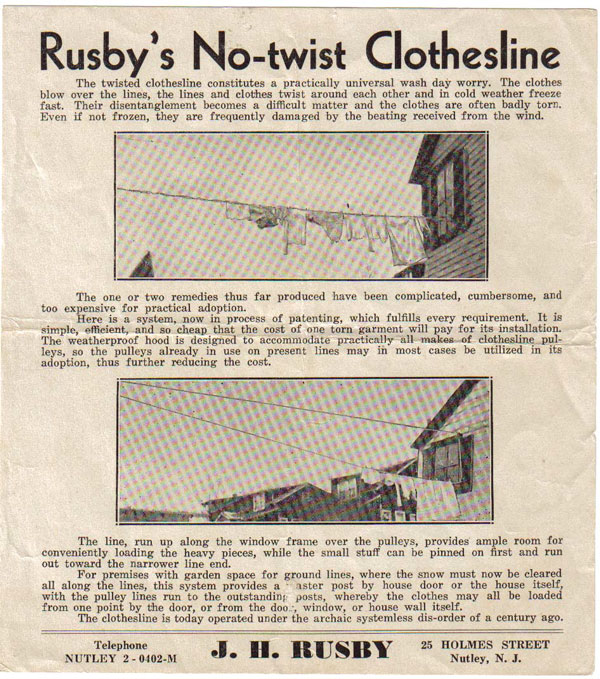